The Screaming Womb: Life Amid Despair

She was born in the Golden Era. She was as beautiful as the sunshine in fields of wheat on a hot summer day. A happy childhood, playfully spent in carnival-like markets full of colored silk, rose water soap, scents of thyme and jasmine flowers. Visitors came from all over the world to see her, to admire her beauty as she turned into a shy teenager. Movie theaters, concerts, cultural spaces, were bursting with admirers, where poetry and music intertwined, drunken souls dancing through endless nights. Nothing predicting what will happen to her next. A bus attacked and all its passengers killed. A war declared. Scared, naïve, she is caught in the clashes, with nowhere to hide. Her body is bruised from beatings, punctured by gunfire. She endured, silently, crying tears of blood, as she witnessed hatred, greed and terror. Fifteen years of civil war, but she withstood. She stood up, an unyielding fierce young woman, prepared to pick up her shattered pieces and ready to give again. And she gave. With generosity. With love. With peace. She became the symbol of cultural diversity, of metropolitanism, of urban prosperity, of religious tolerance. This is when her fathers, her kin, but also strangers started to take interest in her. Strong, greedy men of power. Warlords. “We will save you” they told her. She needed no saving, but they did not listen to her. The self-proclaimed protectors spread out their grasps, clutching her throat, trapping her with their wretched claws. She became a prisoner. A prisoner of their narcissism and corruption. A prisoner of their business deals. She gave birth to sons and daughters, the product of her rape. She raised them with so much care and affection, with much respect for themselves and love for their country, only to see them runaway to faraway lands, escaping the clenches of the greedy powerful men. They carry with them their dreams and their memories, and her blood running through their veins, wherever they go. She is an older woman now. With heavy steps and painful memories, she moves on, as she has always done. We can still hear the songs written for her by long lost lovers. Many will chant her name, in the faint hope of reawakening her beautiful youthful days.

Until it happened. The day that changed her forever. A massive explosion blows her body, ripping her from the inside. An explosion caused by them, the greedy evil men. Betrayed by her lovers, abused by her protectors, she lies still on the floor, her bloodied hands on her butchered womb. From the top of her collapsed lungs, she screams in pain and agony. “What have you done to me?” she cries in despair. “What have you done?”

Beirut, the city of a thousand wonders. Beirut, my city. On August 4, a massive blast rocked the center of Beirut, due to the explosion of 2,750 tons of ammonium nitrate, unsafely stocked at the Port of Beirut. This led to mass casualties, including more than 200 people confirmed dead, dozens still missing, 6000 injured and approximately 300,000 now homeless.  Hospitals, schools, homes, businesses – destroyed. A nation in shock. Collective trauma. Mourning with every new day yet another departed soul. A tragedy caused by the negligence and corruption of leaders and officials in Lebanon. While several theories still prevail, including the possibility of an attack, none of them explain why such significant amounts of dangerous chemicals were unsafely stored at the port for more than 6 years, like a ticking bomb, and why no action was taken by the officials after being informed of their presence. While the ruling political parties hide behind their rhetorical excuses and finger pointing games, citizens are once more left all alone to pick up the broken pieces. As I roam the streets of Mar Mkhael and Gemmayze (two neighborhoods severely damaged) just a few days after the blast, I am touched by the solidarity and compassion of hundreds of young volunteers, with their gloves and their brooms, cleaning up the houses from the glass and debris, and providing food, support, and shelter to those affected. But I am stricken by the complete absence of any governmental protection or civil defense officers on the ground after the blast, and complete inaction towards thefts in people’s houses and properties; houses at risk of collapsing and putting at risk the lives of the remaining residents and volunteers in the streets; and people still trapped in their houses, elderly, people with disability, or people in shock, unable to leave their houses to access humanitarian assistance.

This kind of governmental failure may not be a surprise for many, however, for those unfamiliar with the Lebanese context and the consecutive crises the country has endured just over the past year, let me paint this picture. Imagine working as a salesman in a shop in Beirut. As the head of a low-middle income household, you were trying to make ends meet, and were able to register your children in a semi-private school. Your wife worked part-time in a beauty parlor and your family was subsisting.  Starting October 2019, the economic crisis started to loom over the country and affected all segments of society, including businesses. The profits from the sales at your shop drastically reduced. By the end of the year, your employer had to cut your salary by half, to be able to maintain the shop and its expenses. By March 2020, the covid-19 pandemic hit the country, and your shop was forced to close due to a national lockdown imposed by the government. Your wife quit her job to stay with the kids at home and to facilitate homeschooling. A month later, the shop owner had to let you go, being unable to pay your salary. You now have no source of income. Meanwhile, the economic crisis is exacerbated to a point that your national currency loses 70% of its value. Basic food and household items are now 5 or 6 times more expensive. The banks impose illegal restrictions on your life savings and put limitations on how much money you can withdraw, while the wealthy political class secretly siphoned out all their dollars and safely secured their assets in foreign banks. You are now jobless and unable to buy staple food to ensure subsistence for your family. You take up personal loans from relatives and neighbors, with occasional help coming from sporadic good Samaritans or philanthropic aid. Coronavirus cases are increasing, lockdown is enforced on and off and it is more difficult for you to find any job, even at an hourly rate. Then, on a hot August afternoon, your home, your only refuge, where you and your family were supposed to feel safe, is destructed by a massive man-made explosion, injuring your children. You are now homeless.

This is the personal story of thousands of Lebanese and other residents of Beirut. None of this is a natural disaster. All of this could have been prevented, if it wasn’t for a fatal series of failures, lies, incompetence and corruption from the ruling parties, authorities and warlords of this country, over the past 30 years. Those entrusted to protect and care for the citizens. Those who have done nothing but sabotage development programs and plans, unless they serve their interests and fill up their pockets. If the country has survived thus far, it is not because of the ruling class, but thanks to personal initiatives and band-aid efforts from civil society and other organizations.

We all know what will happen now. We have seen it happen so many times already. Crisis after crisis. Local NGOs will continue their relief work, with somehow limited coordination. They might benefit from the surge of donations and resources that have been pouring in their accounts but might quickly feel overwhelmed due to lack of operational structure.  International NGOs and agencies will form inter-agency coordination bodies and sector-specific working groups, will develop complex logframes and indicators for the Beirut response and recovery, and will contract hundreds of new employees, doubling the salaries of local NGO workers. The parliament will elect a new government and will call it the “Government of National Unity”. The new government and its allies (which brought it to power) will negotiate international aid as a business deal with the highest bidder, will submit global appeals, will collect billions in donations, will set up committees and councils for people’s relief, and will invest in developing a national recovery plan. The plan will obviously never see the light and will never be implemented due to limited funds. Refugees, domestic workers, persons with disabilities, LGBTQ+ will be marginalized from governmental plans. The media and press will distract people with meaningless sectarian disputes or puritanical debates, clichéd soap operas and gossip about Lebanese popstars. Any protesters who dare to cry out against corruption and injustice will be fought with tear gas and live ammunition. Any debut of investigation will be abruptly interrupted for mysterious reasons and will be continuously deferred to a later date. No culprit will ever be identified.  Meanwhile, mourning mothers will clean up the mess, swipe the country’s dirt from the filth of its leaders, rebuild their homes or what is left of them, hang photos of their deceased on their cracked walls, wave goodbye to their emigrating sons and daughters, and continue their lives, with broken hearts, heavy minds, and a lost existence.

Will we ever break this mold? Will we finally be able to build the Lebanon we dream of? Will we give back to Beirut its former glory? Its beauty from its younger days? Will we finally break the system, annihilate it from its core, burn it from within, swallow the ashes and eliminate the remains to a point of non-existence? Have we finally hit rock bottom, that we can only move upwards from now on? Have we suffered such a terrible tragedy, that this shall not pass? Will justice ever prevail? Will those accountable finally be able to face their crimes of negligence, incompetence and corruption? Will it be different this time?

Is it even worth the fight? Or should we just give up, scrape up the pieces of this remnant of a country, subsist in what it has to offer, until we find ourselves on another land, where human beings are respected as such, where health is not fragile, where life is not random, where existence is not futile.

Our tears they will not see. Our shouts they will not hear. But, in this deafening silence, a nation screams. In this anger and devastation, a state will reconstruct. The revolution is born from the womb of sadness.(1) From the rubbles and destruction, a baby is born.(2) From the womb of our earth, life will burst amid despair. In memory of all the lives lost, of all the souls departed, our ears will only listen to this: the cry of a newborn. From the loins of our land, there will be rebirth. 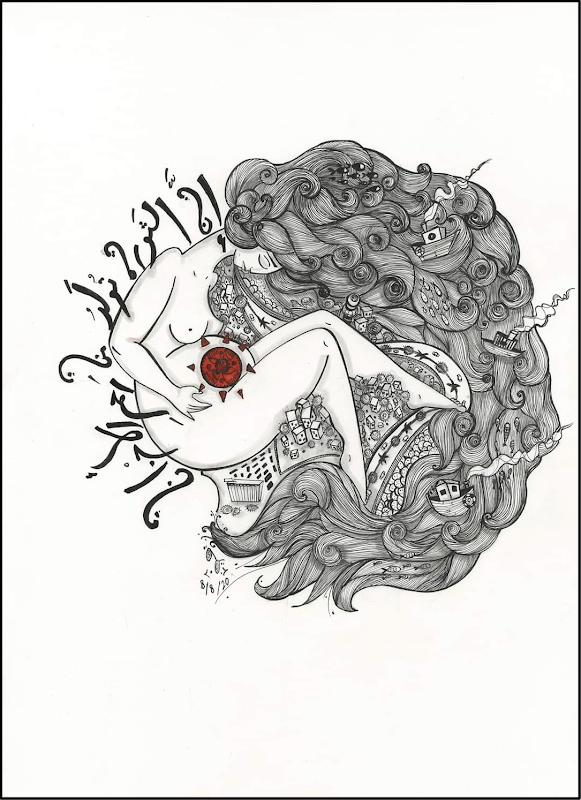 The Arabic text translates into: “The revolution is born from the womb of sadness”.

2. A baby is born in Beirut miraculously minutes after the blast. Read the story here: https://www.bbc.com/news/av/world-middle-east-53671860/beirut-blast-the-mother-in-labour-during-explosion
Go to Top